Beauty queens unite at ‘Universe Give Back’ gala

posted June 08, 2019 at 06:10 pm by  Eton B. Concepcion
Reigning Miss Universe Catriona Gray and Miss Universe 2015 Pia Wurtzbach’s stars shone at the recent benefit gala-fashion show event held at the Marriott Hotel Grand Ballroom in Pasay City showcasing the creations of some renowned local designers.   Dubbed “The Universe Give Back,” the gala sponsored jointly by the Miss Universe Philippines and Bb. Pilipinas Charities, Inc. showcased the creations of Albert Andrada, Michael Leyva, Rhett Eala, Ito Curata, Jot Losa, Avel Bacudio, Cherry Veric, and Martin Bautista with suits by Edwin Tan. Gray and Wurtzbach strutting the stage served as the finale of the much-awaited fashion show with the forty candidates of Binibining Pilipinas 2019 and some ramp models.  The charity gala was held for the benefit of two non-government organizations that are closest to the hearts of the two Miss Universe queens, “Love Yourself, Inc.” that Pia supports and “Young Focus Philippines,” which is the favorite organization of Gray.  Love Yourself, an organization of volunteers working, promotes self-love and equality and health information awareness, particularly, among LGBTQI+ community on issues such as AIDS/HIV. Young Focus Philippines, on the other hand, helps provide free education for poor children and supports out-of-school youth programs. 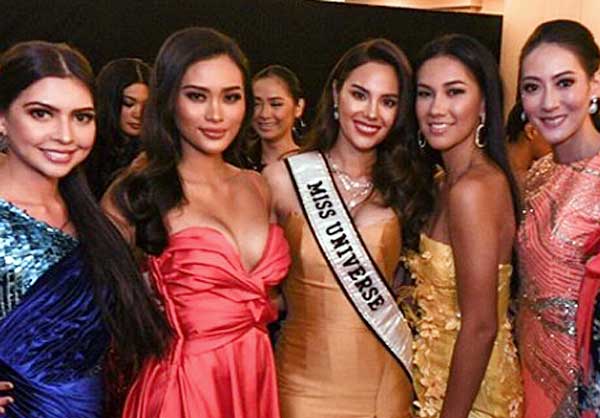 Gray returned in Manila from New York City to attend the Binibining Pilipinas 2019 coronation where she will crown her successor. Gray, who was stunning in a yellow Jearson Demavivas gown, said that she is feeling quite emotional for the pageant night having been where her journey for the Miss Universe all began, and now that she is passing the honor, her Binibining Pilipinas crown, to the next Philippine representative. Gray and Wurtzbach joined forces on a mission to advance women empowerment and uplift the indomitable Filipino spirit to the fore through fashion and philanthropy. Singson-Michael said in a message that they hope that the gala would become a catalyst for more similar charity events in the future and to bring the Miss Universe brand to a higher level than a one-day television special. Given tributes at the event were Miss Universe 2010 4th runner-up Venus Raj, who completed her Master’s degree in Community Development from UP, and Grace Bacus, a poor house helper from Talisay City who graduated Magna cum Laude with a degree of Secondary Education major in English from Talisay City College.
Topics: Miss Universe 2018 , Catriona Gray , Miss Universe 2015 ,  Pia Wurtzbach , The Universe Give Back