posted March 30, 2020 at 12:13 am by  Joel E. Zurbano
Six Filipino members of a medical evacuation flight and two foreign passengers were killed when their West Wind 24-type aircraft operated by Lion Air caught fire and crashed while taking off at runway 624 of the Ninoy Aquino International Airport on Sunday night. All persons on board the plane died, according to initial information released by the Manila International Airport Authority (MIAA), as rescuers worked to recover their remains. The aircraft, registered as RP-C5880 and bound for Haneda airport in Tokyo, Japan, was on a medical evacuation mission when the crash happened around 8 p.m., three minutes after its scheduled departure.  MIAA ordered the immediate closure of the runway. MIAA General Manager Ed Monreal said in a press conference that he could not release information on the passengers, as flight operator Lion Air was still trying to contact the victims’ next of kin. 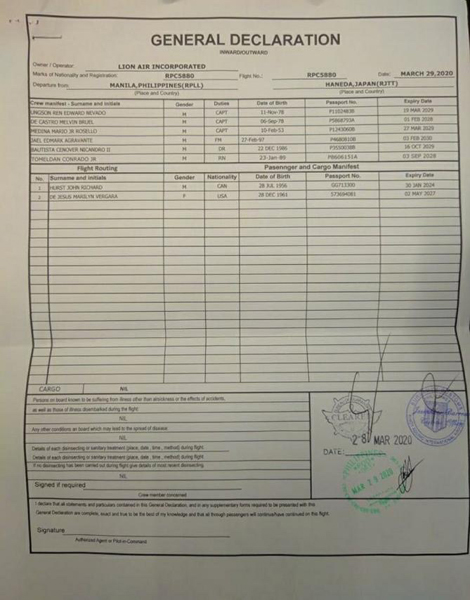 But according to a copy of the airplane’s general declaration obtained by Manila Standard from an assistant of Senator Manny Pacquiao, the passengers were identified as John Richard Hurst, aged 63, of Canada; and Marilyn Vergara De Jesus, 58, of the USA. The pilots were identified as Capt. Ren Edward Nevado Ungson, Capt. Melvin Bruel De Castro, and Capt. Mario Rosello Medina Jr. The others were Dr. Cenover Nicandro Bautista II and nurses Conrado Tomeldan Jr. and Edmark Saes. Eric Apolonio, Civil Aviation Authority of the Philippines spokesman, said the declaration was “not official.” While the accident was unfortunate, Monreal said they could ground the whole Lion Air fleet in the country while investigations continued on the crash. He confirmed the foreign nationals killed were Canadian and American.

Last year, another Lion Air plane on a medical evacuation mission also caught fire and crashed in Calamba City in Laguna, killing all nine persons on board. An incoming Korean Airlines flight that was to use runway 624 last night was diverted to Clark International Airport, Monreal said. Only seven flights were scheduled to land and take off at NAIA on Sunday owing to the country’s coronavirus lockdown, he added. According to MIAA during the presscon, the flight tower at NAIA was alarmed the airplane could not take off despite being light enough to clear the length of the runway. The plane had just come from Iloilo to deliver medical supplies, it added. The CAAP clarified that RP-C5880 was airworthy and that all its pilots’ licenses were current. “The flight, which was on a medEvac mission to Haneda, Japan, was carrying two (2) passengers and six (6) crew members. Immediately after the incident, the MIAA Fire and Rescue team were dispatched to the site to douse the flames with chemical foam. Unfortunately, no passenger survived the accident,” MIAA added in a statement. The Civil Aviation Authority of the Philippines sent a team of investigators from its Aircraft Accident Investigation Board to determine the cause of the incident.

“Our fire and medic teams were already dispatched to NAIA Terminal 2 to respond to the plane crash incident involving Lion Air Flight RPC 5880. Eight passengers consisting of a flight medic, nurse, doctor, three flight crew, one patient and a companion were on board,” said Senator Richard Gordon on his Twitter account. “The plane caught fire and exploded as it was taking off the NAIA runway 24,” he added. Apolonio said the Agusta WW24 aircraft bound for Japan encountered a technical problem while rolling for takeoff. He said the Philippine Aeronautical Rescue Coordination Center (PARCC) is gathering additional information about the accident. Apolonio said Aircraft Accident Investigation and Inquiry Board (AAIIB) chief investigator Rainier Baculinao has been dispatched to help determine the cause of the accident. Killed in the Laguna incident last year were plane pilot Capt. Jesus Fernandez and co-pilot First Officer Lino A. Cruz, Jr.; Dr. Garret Garcia; Kirk Eion Badilla and Yamato Togawa, both registered nurses; Tom Carr, a patient from New Zealand, and his wife Emma; flight mechanic Raymund Bulacja, and one Ryx Gil Laput. CAAP officials said only eight of the nine passengers were listed in the flight manifesto of the 11-seater Beechcraft King Air type (BE350). It stated that “Erma Carr, a Filipina with New Zealand citizenship, is the wife of the New Zealander patient.” CAAP incident reports showed that the aircraft also operated by Lion Air with registry number RP-C2296 crashed around 3 p.m. in a private resort in Barangay Pansol in Calamba. A mother and her son, who are the caretakers of the resort where the plane crashed, were also hurt and rushed to a hospital in Calamba following the incident. Authorities said the plane crash triggered a blaze in the area. The flight, which comes from Dipolog Airport in the province of Zamboanga del Norte, “lost radar contact at around 3:10 p.m. while flying 25 nautical miles from Manila,” according to CAAP.
Topics: Lion Air , NAIA , Plane crash , Civil Aviation Authority of the Philippines , Eric Apolonio , Ed Monreal