Jumanji: The Next Level trailer is finally out and will blow your mind

posted July 02, 2019 at 03:00 am by  Manila Standard Digital
By Ponciano "John" Melo Jr. Ready for another one hell round of adventure inside a Nintendo-style video game? 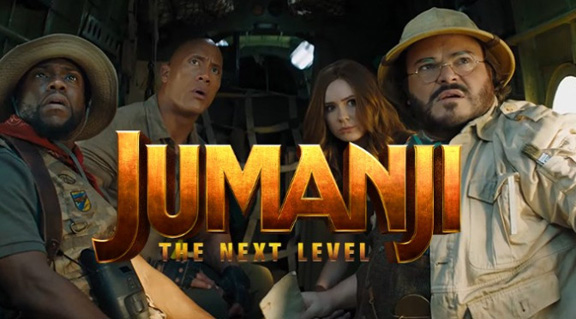 If you're not, fasten your seatbelts and pack your things as you join Smolder Bravestone (Dwayne Johnson) and friends to another mission and adventure in the jungle. Recently, Columbia Pictures gave some sneak peeks to fans of the fourth installment of the Jumanji series — Jumanji: The Next Level — which is starred by Dwayne Johnson, Kevin Hart, Jack Black, Karen Gillan, and Nick Jonas from the "Game World" while Ser'Darius Blain, Madison Iseman, Morgan Turner, and Alex Wolff will be coming from the "Real World." But fans were shocked as more artists were announced to become part of the sequel like Danny Glover, Awkwafina, and Danny DeVito. "I have been keeping a very small secret to our new ‘Jumanji,’” Johnson shared on his Instagram account.  The 'small secret' that Johnson is talking about is Danny DeVito as Eddie and Danny Glover as Eddie's friend being part of the film. But, more than that, the trailer also shows that Johnson, instead of playing the character of Spencer, this time, he will be portraying the role of Eddie (DeVito) his cranky and eccentric grandfather in the game world. “For this sequel, the goal was to present something fresh and innovative — and insanely FUN,” Johnson said in another Instagram post. “I got lucky having a gem like DeVito to channel, and wait til you see my co-stars and the performances they bring.” Their mission: Spencer's friends visited him and found out that he was missing. They saw that the game is running and will be following him in the Jumanji world to save him and escape “the world’s most dangerous game.” There's more! Spencer's grandfather, Eddie, and a friend will be joining the squad. More than saving Spencer, his friends must also help Eddie and the friend to get used to their in-game avatars to be able to save Spencer. Get ready also for a fun journey with the squad because most of the shown scenes were shot in different countries like Canada, Georgia, New Mexico, and Hawaii. “Without any further ado, ladies and gentlemen, children of all ages, all around the world — please enjoy our brand new trailer to our brand new “Jumanji: The Next Level. Enjoy," said Johnson. Its third installment, Jumanji: Welcome to the Jungle, gained praises from movie critiques with its "charming cast and a humorous twist to offer an undemanding yet solidly entertaining update on its source material" according to Rotten Tomatoes. The American review-aggregation website for film and television also gave Jumanji the approval rating of 76% based on 223 reviews and an average rating of 6.2/10.  Meanwhile,  Chris Hewitt from the Empire Online said, "A consistently inventive and chucklesome reinvention of the Jumanji concept. Okay, so it coasts on the charm of its lead quartet, but when there’s this much charm, that’s no bad thing." The movie also let Johnson won the Kids' Choice Awards for Favorite Actor and Teen Choice Comedy Movie Actor in 2018.  Jumanji: The Next Level will be released on December 13, 2019.
Topics: Columbia Pictures , Jumanji: The Next Level , Dwayne Johnson , Kevin Hart , Jack Black , Karen Gillan , Nick Jonas , Danny Glover