posted October 04, 2020 at 12:50 am by  Willie Casas
The Philippines, under various stages of lockdown since March due to the pandemic, is targetting 95 percent recovery rate from coronavirus after health authorities recorded 2,674 infections during the weekend. 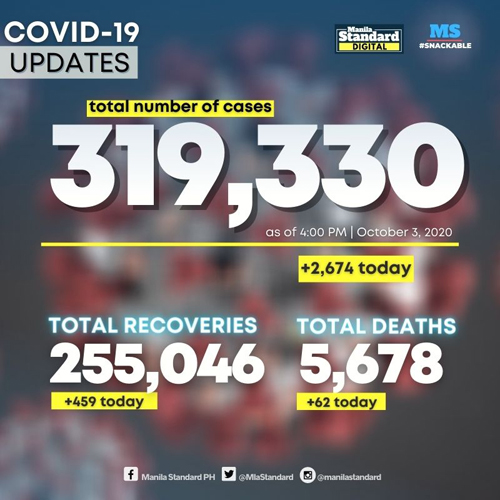 That despite, the Department of Health maintained the country was doing well in terms of number of recoveries as it eyed more number of patients recovered from the disease. The DOH also announced  459 recoveries. This brings the total number of recoveries to 255,046. The DOH also reported 62 new fatalities, bringing the death toll to 5,678. In an interview on state-run PTV’s Laging Handa, Health Undersecretary Maria Rosario Vergeire said what the Johns Hopkins University Coronavirus Resource Center had done with the rankings was only to get the cumulative number of cases recorded by every country. “We want to target 95 percent recovery rate at the soonest possible time,” she said. Vergeire also emphasized that the Philippines has a very low case fatality rate or the number of deaths relative to the total people infected. She said the current 80 percent recovery rate could increase as the DOH awaited complete data on the so-called “time-based tagging”—patients who have recovered but are not yet tagged as such by laboratories or local government units. Top provinces by newly-announced cases are NCR,   1,046;  Cavite, 257;  Rizal, 165;  Batangas, 137;  and Laguna, 121. There are 58,606 active cases. Of the figure, 87.1 percent are mild;  8.8 percent are asymptomatic;  1.2 percent are severe;  and 2.8 percent are critical. At the same time, authorities said a total 10 labs were not able to submit their data to the COVID-19 Data Repository System (CDRS) on October 2, 2020. The Philippines has tested 3,602,725 individuals for COVID-19.  There are 105 licensed RT-PCR laboratories and 33  licensed GeneXpert laboratories in the country. The DOH also said that the nationwide data revealed that,  as of October 2,  47 percent of approximately 2,000 total ICU bed capacity are occupied;  40 percent of approximately 15,300 total isolation bed capacity are occupied;  42 percent of approximately 6,000 total ward bed capacity are occupied;  and 22 percent of approximately 2,200 total units of ventilators are being used. Meanwhile, the Department of Health on Saturday said it had yet to receive from the World Health Organization its list of COVID-19 vaccines that would be included in clinical trials. Vergeire said the WHO committed to release the list of vaccines, as well as the sites where the trials would be conducted, by the third week of October. Vergeire said, “We’ll wait for that because they also gave us a tentative date for starting the trials by the end of October..” While waiting, Vergeire said several agreements had been made between the Department of Science and Technology and the Department of the Interior and Local Government to ensure the local government’s help in the conduct of the clinical trials.
Topics: coronavirus disease , Department of Health , death toll , Maria Rosario Vergeire