posted March 09, 2019 at 06:40 pm by  Manila Standard Lifestyle
Interacting with whale sharks or butanding may be reason enough to visit Sorsogon. But aside from these gentle giants, there are more must-see destinations and must-do activities in this province in Bicol Region.  Each of the 14 towns of Sorsogon boasts unique characteristics and treasure trove of tourism gems.  Located in the heart of Sorsogon City, the provincial capital, is Rompeolas (baywalk), a scenic promenade with a view of the mountains and Pinaculan Island, which is being developed by the provincial government as a tourist zone. The seat of government is the postcard-pretty Provincial Capitol which features a classical Graeco-Roman architecture and has a museum and heritage center which chronicles the province’s checkered history. Beach lovers can bask in the resort colony in Bacon District, known for Tolong Gapo and Pagol beaches, and the crater-like Paguriran Rock Island which has a shallow lagoon enclosed by a craggy rock wall. For a cozy sight-seeing, tourists can have lunch with a side of lush mangrove forest view at the Buhatan River Cruise.  Another must-see is the 3,215-hectare Abang Mangrove Reserve in Prieto Diaz, an award-winning wetland which is a habitat to around 30 bird species. Also within the town is Nagsurok Caves which has an underground river which snakes through its half-mile length. An emerging tourist hotspot is the Pacific coastal town of Gubat which is frequented for the powdery beige sand and turquoise water of Rizal Beach and Buenavista Beach, Bicol’s surfing mecca whose waves are ideal for beginners. Lola Sayong Eco-Surf Camp offers surfing lessons at rock-bottom rates where one can get initiated to the sport and help send local youths to school. An old-time poster image is the 3,673-hectare Bulusan Volcano Natural Park, a lush rainforest and wildlife sanctuary reserve. Its core, Bulusan Lake, is a quiet retreat where visitors can go around its 16-hectare surface on kayaks and pedal boats, get a massage on a raft, or commune in the stillness of nature. A few minutes away is Balay Buhay sa Uma, an agri-tourism resort noted for its bee farm, freshwater ponds, cold spring pool, and indigenous greens, surrounded by cool springs emanating from Bulusan Volcano. Meanwhile, neighboring Irosin town has a number of sulfuric hot springs which are believed to be therapeutic.  Heritage buffs can marvel at St. Joseph Church in Barcelona. The church has a coral rock baroque dome-like structure and bell tower, with the remnants of the old municipal hall, fortress, and school building nearby. Juban is regarded as a heritage town because of its well-preserved houses built in the traditional bahay na bato architecture. A noteworthy house is Casa Feliz, which has found new life as a pension house, and a “living museum” showcasing heirloom pieces. Gibalon Shrine in Magallanes, on the other hand, has an interesting historical tidbit, being the site of Luzon’s first Catholic Mass held in 1569. This merry mix of culture, nature, and adventure came into a confluence as the province recently hosted the 19th Philippine Hobie Challenge, the country’s premiere extreme regatta. Organized by the Philippine Inter-Island Sailing Federation, grizzled veteran sailors from all over the world take part in this fun race to put the spotlight on the lesser known coastal areas of the archipelago. This year’s edition fired off on Feb. 18 in Donsol and sailed to Subic Beach in Matnog, which is popular for its pinkish powdery sand and crystalline water. Participants extended outreach programs by donating useful materials to the host communities as part of the group’s social responsibility. Governor Robert Lee Rodrigueza said the inclusion of Sorsogon in the Hobie Challenge is a recognition of its rich marine resources and storied maritime heritage dating back to the Spanish period. 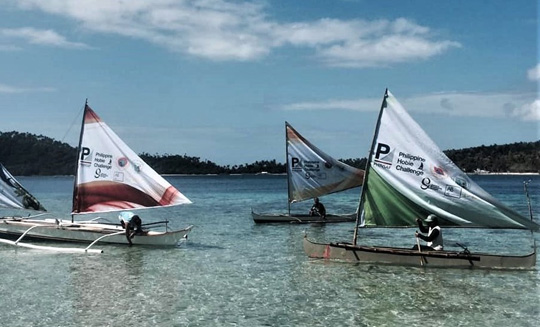 The local chief executive noted that the tourney will boost the initiatives to position the province as a hub for water-based recreation under its “So Sorsogon” tourism branding which tags it as “so breathtaking, so precious, so gifted, so mesmerizing, and so gastronomic.”
Topics: Sorsogon , Rompeolas , Tolong Gapo , St. Joseph Church , Philippine Inter-Island Sailing Federation