posted February 08, 2020 at 07:50 pm by  Manila Standard Business
Jerry Sibal, a Filipino migrant who made a name in New York as an event designer, floral artist and author, recently returned to the country to help enliven the local flower industry. An architect by education, Sibal was born in Manila to Filipino and Chinese parents and migrated to the United States in 1992, settling in New York and eventually working with top designers and celebrities around the world. As founder of Jerry Sibal Design Llc, he found success in the US where he designed events for the New York Yankees, Virgin Atlantic, Citigroup, Verizon, the Frick Collection, the Museum of Modern Art, Metropolitan Museum and other well-known corporations and charities. His clients include Sir Richard Branson, Celine Dion, Marilyn Horne, Gloria Vanderbilt, the Princess of Qatar and a plethora of celebrity clients and friends. He is the author of the highly successful book “An Event to Remember”. Sibal now aims to share his expertise with Filipino florists.  He believes that if other countries can have thriving horticulture and floriculture industries, attract millions of tourists, generate billions in revenues and host successful international flower shows, it is high time for the Philippines to do the same. He believes that flowers are key to making an event extra special. “There’s so much positivity that it creates. Just by using flowers, one create an environment of happiness, joy, fulfillment. It’s so precious,” he said. Sibal made his sentiment known during the launch of the first Philippine International Flower Show on Jan. 29 at the Philippine International Convention Center.  The PIFS, the first of its kind in the country, will be held on Oct. 15 to 18, 2020, also at the PICC. The event is expected to bring together players in the industry, tourism, agriculture, environment and trade officials, local government executives, farmers and horticulturists, investors in flower propagation, technology providers and end-users like hotels and other flower enthusiasts. In his welcome message, PICC deputy general manager Roberto Garcia said the event would provide an avenue for the provincial and regional floriculture and horticulture industries to showcase their products and potential. “The event will also feature the diverse native Philippine flora to a wider audience,” he said. Among the guests who graced the launch were Margarita Moran-Floirendo, chairperson of the board of trustees of the Cultural Center of the Philippines and Rep. Jocelyn Sy-Limkaichong of the first district of Negros Oriental. 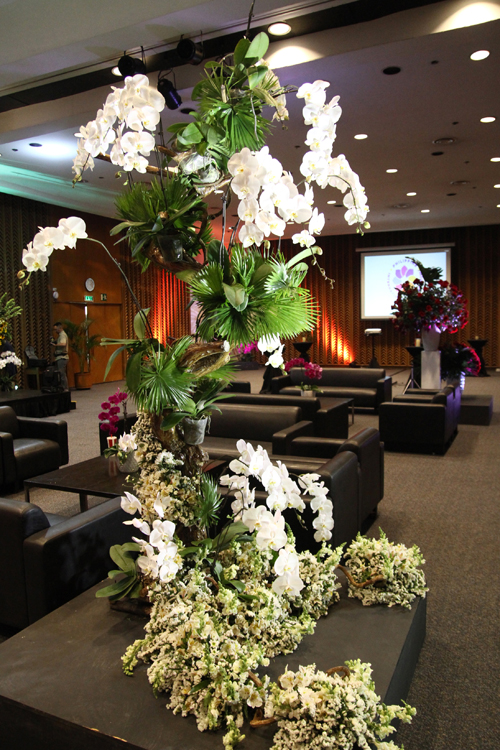 “I’ve been doing this for 30 years. I’ve been traveling and attending flower shows around the world, and now I want to come back home to share what I’ve seen,” Sibal said in his speech. “You cannot quantify the joy that flowers can give you. This is the force that brought me back here,” Sibal said. Garcia said the three-day PIFS would have three main events: the exhibition, floral and design workshops and educational tours. “It’s an honor to work with Jerry on this,” Garcia said. “We eagerly wait to see his creativity and ingenuity here. The PICC is truly proud to be part of this trailblazing event,” said Garcia. Sibal who uses flowers from all over the world made him wonder why the Philippines, an agricultural country, did not have a large cut flower export industry. This, in turn, led him to organize the PIFS. “We can unite and grow another type of industry that can help and empower people and create jobs,” he said. “We’re going to showcase the horticulture and the floriculture of the Philippines,” Sibal said. “We just want to get everybody involved and be aware of what we can do in order to help our farmers, our growers, empower them, create more business opportunities and show to the world that we have the best designers.” “We’re going to invite international floral designers and scientists to help us develop better quality flowers… Our intention is really to empower local farmers and growers and create an export-import industry,” he said. The conference, the first of its kind, will feature a theme park-style exhibition, floral and event designing workshops, educational tours and merchandising. It will give Philippine floriculture and horticulture players the opportunity to showcase their products and meet potential buyers. “The growers, the users, the end users of flowers is such a big industry. Even in the States, it’s a multi-billion-dollar industry,” Sibal said. Aside from showcasing the variety of local flora, Sibal also hopes to attract scientists who can help the local flower industry reach global competitiveness. “It’s not only for the local use. I’m eyeing exportation and to increase our demand locally, then go international,” he said. The PIFS also aims to encourage event tourism.  “We’d like to invite tourists to come over and do events here,” Sibal said. We have space. We have the talent. We have the ability to host big events here… We speak very good English… and we’re very skilled workers and designers… It’s all about putting together and it becomes event tourism. It’s a new kind of thing right now.” It will be held in cooperation with the PICC and the support of government agencies such as the Department of Agriculture, Department of Environment and Natural Resources, Department of Trade and Industry, Center for International Trade Expositions and Missions and the Department of Tourism.  “I hope that people will come and join us because we need to do this together,” Sibal said.
Topics: Jerry Sibal , flower industry , Jerry Sibal Design Llc